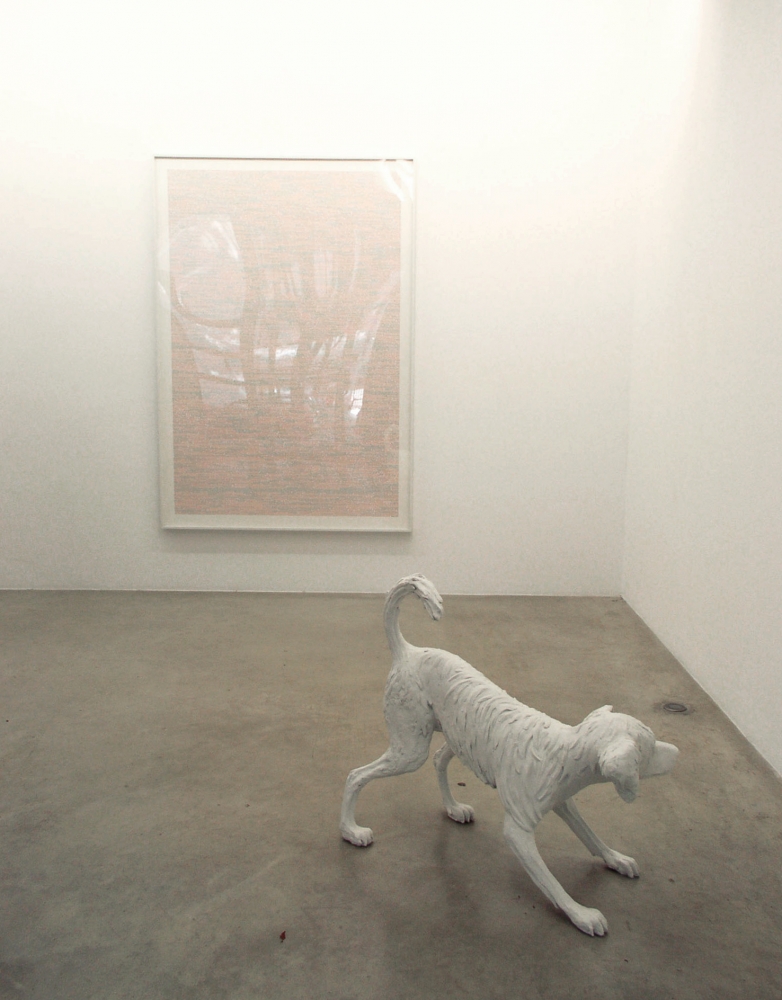 Furry, feathered, or finned; silky, slimy or scaly. We live so closely with animals, as companions and as food. We paint and sculpt and animate them, and over the ages we’ve used their flesh as both pigment and canvas, from cave frescos and half-remembered pottery shards to absurdly muscular Renaissance cats—and that killer red lip. (Check the ingredients of your cosmetics for pulverized cochineal beetles, masquerading as natural red or crimson lake or carmine, or the mysterious “CI 75470.”) We imbue animals with symbolism and innuendo—goldfinches in Biblical art, all those odalisque swans. Consider Picasso’s Guernica and Jeff Koons’ balloon dogs, or Max Hooper-Schneider’s dystopian vitrines, Ebony G. Patterson’s surreal, chimeric hybrids and Anicka Yi’s olfactory intimations. Banksy’s rats.

Two gallery presentations at Independent 2019 show the range of this zoological tradition. At Air de Paris, Joseph Grigely’s statue of a painted fiberglass dog guards over a number of Jean Painlevé photographs and several smudgy avian portraits from Jean-Luc Verna. There’s an unexpected safari feel to it all. Verna’s solvent transfer, pencil and makeup drawings have a blurred, felted quality that suggests birdwatching through modest binoculars, or picking out a thrush from among the foliage. The inspiration for Grigely’s canine sculpture is a dog in a painting of the Riva degli Schiavoni by Canaletto, the celebrated 18th century painter whose scenic Venetian views became both enticement and souvenir for visiting English aristocrats on their Grant Tours. Come for the ducal Doge Palace; stay for the good boys. 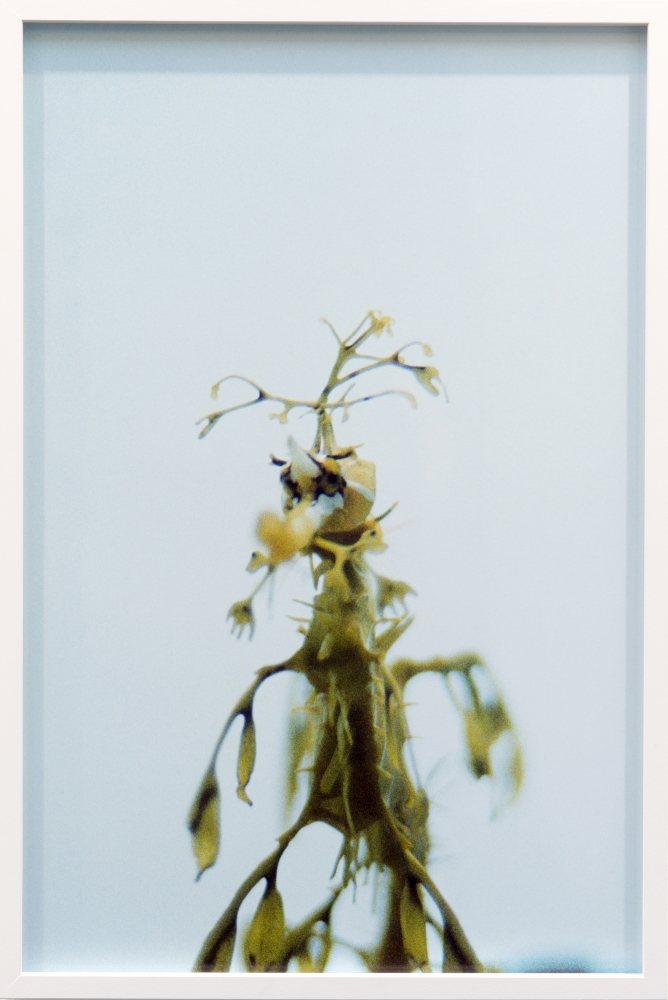 Jean Painlevé’s beautiful photographs from the 1930s invite the viewer to consider the animal kingdom’s smaller denizens. The artist and filmmaker was known for his pioneering underwater fauna photography, represented here by seahorses which have a rather scientific, specimen print air. Rather more intriguing are the zoomed-in shots of insects: two lovely grasshoppers, a gaping fish mouth, and a disconcertingly cute jumping spider, all big eyes and fuzzy forelegs. There are so many beady eyes. I’m reminded of Cai Xiang’s 1049 treatise on tea, which features a way to recognize optimal steeping temperatures based on the eyeballs of aquatic animals: tiny bubbles or shrimp eyes for Japanese green teas, larger crab and fish eye-sized bubbles for white and green teas, a rope of pearls for black teas, and dragon eyes, or a roiling boil for pu’erh and prepackaged teabags.

A lone color photograph from Shimabuku, which features a lissom seahorse creature, rounds out the Air de Paris presentation. Leafy limbs, a twiggy  toupée, and the suggestion of eyes makes it remarkably anthropomorphic, like a half-remembered Tolkienian character. The canon of animals in literature—from Aesop’s fables and Indian mythology to Watership Down and Animal Farm—reminds us that depictions of animals are, more often than not, transposed critiques of culture and society.

The canon of animals in literature—from Aesop’s fables and Indian mythology to Watership Down and Animal Farm—reminds us that depictions of animals are, more often than not, transposed critiques of culture and society.

This connection becomes overt in a booth of paintings by Gilles Aillaud (1928-2005), from a presentation by Ortuzar Projects and Galerie Loevenbruck. The artist was a chief figure in the movements of New Figuration and Narrative Figuration, but his oeuvre was multivalent, encompassing scenography, poetry, philosophy and most notably, set design. He is remembered for the controversial symbolic work Live and Let Die or The Tragic End of Marcel Duchamp, painted in collaboration with Eduardo Arroyo and Antonio Recalcati, as well as his portraits of animals held captive in artificial environments, several of which are on view here. The presentation will coincide with a solo at Ortuzar Projects, which will be the first time Aillaud has been exhibited in NYC since 1982.

Why look at animals? In John Berger’s 1980 essay with the same title he links the zoo with other sites of marginalization, like alienation under modern capitalism. (The essay was dedicated to Aillaud.) The same sentiment underwrites Aillaud’s carceral paintings. Especially notable is a somber 1972 painting of a rhinoceros, gazing sadly at a papered-up railing. In its subject matter, it recalls Albrecht Dürer’s infamous 1515 woodcut of an Indian rhino. Many of Aillaud’s works additionally place the viewer outside the cage: bars obscuring the animals are common, as in a remarkable jail cell shot of two lionesses in a turquoise cell, paws and tail drooping over a too-small ledge. But instead of Dürer’s armored planes, here the animal’s skin looks as soft as burnished suede, even velvety and we are inside its prison with it. It’s terribly intimate, and almost too tender.

Rahel Aima is a Brooklyn-based writer and editor from Dubai. She is special projects editor at The New Inquiry, a correspondent at Art Review Asia, and a contributing editor at Momus.